Our proprietary curriculum is developed by industry and domain experts investing hundreds of hours in research and development to create the best technology program for your child.

Plus a 2 week money back guarantee.

What is Competitive Programming

The goal of our Competitive Programming classes is to build strong algorithmic thinking in students and prepare them for the USA Computing Olympiad (www.usaco.org).

The journey takes time, which is why we start early. In addition to learning a Coding platform like JAVA or Python, the more important skill students need to develop is deep algorithmic thinking.

In the Junior and Intermediate levels, we use a combination of the following platforms: Scratch, MIT App Inventor, JavaScript, Python, JAVA but the focus is on deep problem solving with the backdrop of Game & Application Development. In other words, students develop deep problem solving skills while developing various Games & Applications but go much deeper than our regular track.

Check out a sample problem of the USA Computing Olympiad (for our Level Zen students):

The cows have come up with a creative new game, surprisingly giving it the least creative name possible: "Moo".

The game of Moo is played on an N×N grid of square cells, where a cow claims a grid cell by yelling "moo!" and writing her numeric ID number in the cell.

At the end of the game, every cell contains a number. At this point, a cow wins the game if she has created a region of connected cells as least as large as any other region. A "region" is defined as a group of cells all with the same ID number, where every cell in the region is directly adjacent to some other cell in the same region either above, below, left, or to the right (diagonals don't count).

Since it is a bit boring to play as individuals, the cows are also interested in pairing up to play as teams. A team of two cows can create a region as before, but now the cells in the region can belong to either of the two cows on the team.

The first line of input contains N (1≤N≤250). The next N lines each contain N integers (each in the range 0…106), describing the final state of the game board. At least two distinct ID numbers will be present in the board.

As you will see there is no standard formula for solving these problems. Instead, students learn to excel through years of developing strong  problem solving skills and algorithmic thinking.

We have FOUR reasons why:

Is the Competitive Programming track the right option for your child (versus the Regular Coding track):

If your child (Grades 3 and higher)  displays most of the following, they will love Competitive Programming:

No prior coding knowledge required for the Junior & Intermediate Level.

Our Junior and Intermediate Programs are designed to use different coding projects for students to develop deep algorithmic thinking. The projects spanning classwork and home assignments are designed to teach algorithm fundamentals through deep problem solving. Many projects will be pre designed Code with pre-planned errors that students have to identify and solve.

Students will build games and animations as they learn various Coding platforms, however in the Competitive Programming track - they will go much deeper into exploration and problem solving.

In the Junior and Intermediate levels, we use a combination of the following platforms: Scratch, MIT App Inventor, JavaScript, Python, JAVA.

Game Functionality: Make the ball bounce upon hitting the paddle.

Basic Approach: Code the ball to bounce at a random direction above the paddle.

A video example of a Debugging project

Zen: Our Pro students (currently by invitation only)

All our coaches bring a diverse expertise in Coding & Tech 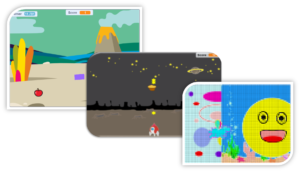 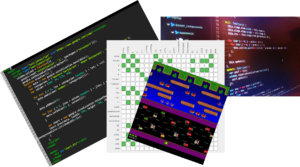 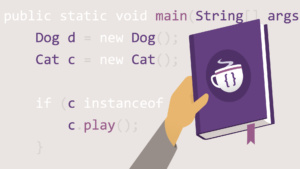 Pre-requisite: 24 months of prior programming experience OR Completed Level Intermediate